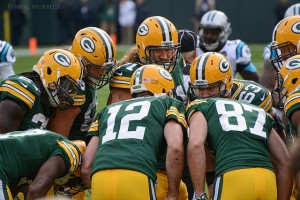 The Packers were second best in the Georgia Dome from start to finish and Green Bay supporters can have no qualms with the final result. Unfortunately, McCarthy’s side must now pick themselves up and prepare for a busy offseason ahead of the 2017 campaign.

Offensively, the Packers were far too one-dimensional this year. The lack of a running game hasn’t affected Green Bay too much in recent times but the weight of expectation on Aaron Rodgers’ shoulders was always going to catch up with the Packers sooner rather than later.
Rodgers completed 60% of his pass attempts in Sunday’s defeat to Atlanta, throwing for 287 yards and three touchdowns while throwing an interception that handed the initiative to the Falcons.
Pressure throughout the duration of Sunday’s clash – something that the Dallas Cowboys failed to do. Quinn will now feature in his third Super Bowl in four years and Packers fans will be hoping that Atlanta, priced at 6/4 to win the Super Bowl with Sportsbet.io, can defeat Tom Brady and the New England Patriots in this season’s showpiece event.

Green Bay are in dire need of a competent option at running back ahead of next season. If the Packers draft well, there’s absolutely no reason why McCarthy’s men cannot challenge for a spot in the Super Bowl in 2017.

With Eddie Lacy potentially out of contract and on his way to free agency and James Starks failing to inspire confidence out of the backfield, the Packers may look to select a running back early; especially as there are a number of talented options in the upcoming draft class.

Dom Capers has received plenty of plaudits for Green Bay’s improved defensive effort in the second half of the year but the Packers were carved open too many times this season. At one stage of the campaign, Green Bay were conceding over 30 points per game – a figure that is far too high for a side looking to win a Super Bowl. As the old adage goes, defense wins championships – and McCarthy needs to focus on tightening things up. Key personalities returning from injury will help but the Packers are still short on bodies.
With the right preparation and draft picks, the Green Bay Packers can secure a fifth NFL title next year. Rodgers ranks alongside Tom Brady as the best quarterbacks in the league and a couple of defensive additions will certainly help McCarthy’s men in their bid for glory.

The Packers are set for clashes with the NFC South and AFC North next year and Green Bay will be quietly confident of taking advantage of some favourable encounters. Defensively, Capers and McCarthy need to work hard to tighten coverage and the Packers could be in business; watch this space, it would be foolish to write Rodgers and co out.