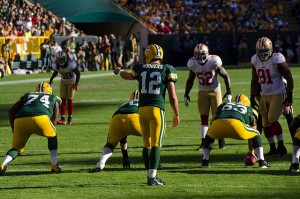 At 33 years old, Aaron Rodgers is one of the most experienced quarterbacks in the National Football League and Packers fans will hope that he can emulate Peyton Manning and Tom Brady in terms of prolonging his career at the top level.
Rodgers showed no signs of letting up this year as he led the Packers to the NFC Championship for the second time in three seasons, but Mike McCarthy’s men fell short against the Atlanta Falcons.
The Green Bay star was close to his brilliant best in 2016; completing 401 of his 610 pass attempts for 4,428 yards. In the process, Rodgers threw a league-leading 40 touchdowns to just seven interceptions and many believe that he should be named the regular season MVP for the third time.

While you could make a decent case for Super Bowl quarterbacks Tom Brady and Matt Ryan, Rodgers more or less singlehandedly carried his side through the second half of the campaign. That’s not to say that Green Bay’s success en route to the Georgia Dome was entirely down to number 12, but he did the unthinkable on more than one occasion.

At one point, it looked like there was going to be another chapter in the Seahawks-Packers rivalry – but Atlanta’s triumph against Seattle dashed those hopes. There’s nothing that Green Bay fans would love more than to eliminate the Seahawks from playoff contention, but the 38-10 victory in Week 14, as previewed by Oddschecker, will have to do for 2016.

Next year, Packers supporters will be hoping for another chance to get one over on their modern rivals after the “Fail Mary” in 2012 and Green Bay’s collapse in the championship game in 2014. With Rodgers at the helm, anything is possible.

Aaron Rodgers turns 34 in December but Packers fans needn’t worry about his future at Lambeau Field just yet. After his incredible year, 2 looks stronger than ever and a couple of additions on offense will help the Green Bay star to R-E-L-A-X. Rodgers carried the offense this campaign but another north-south running back should take some of the pressure off his shoulders.

A lesser man would have crumbled this year, but not A-Rod. He is still capable of taking a sack, as shown by his incredible effort to hold onto the football in the closing stages of that famous win against Dallas on divisional weekend.

Packers fans will be left to rue another missed shot at the Super Bowl but it isn’t like this is an aging Green Bay side. Rodgers and company don’t need to adopt the “win now” strategy just yet – although the sands of time will catch up with the 33-year-old eventually.