The Packers have 21 players in the Pro Football Hall of Fame and have won a total of 13 NFL titles, including four Super Bowl Crowns.  Now that the 2019 NFL Drafts are taking place and the wagers are on fire, we decided to write this article and remember some of the best players for the Green Bay Packers. There are of course many other great players who did not make the cut and there are of course many other players who also deserve a mention, but the top can only contain the very best. If you want to wager on the NFL Drafts or in general for the games throughout the year, make sure to compare the best bookmakers and find the best platform for you.

Don Hutson is wide receiver who is in both the Packer Hall of Fame and the Pro Football Hall of Fame. He was named All-Pro 11 times and was named to the Pro Bowl 4 times. The Packers also honored Hutson by retiring his uniform number (14) and naming their practice facility across from the Lambeau Field after him in 1994. When Hutson retired from NFL, he held 18 NFL records which only goes to show his impact on the game, He was also awarded NFL’s MVP award in both 1941 and 1942. 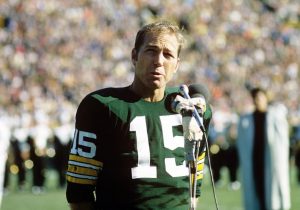 Bart Starr won 5 NFL championships as a Quarterback – more than anyone else. He helped The Packers win the first two Super Bowls and was honoured with MVP of both of them. He is probably best remembered for the Ice Bowl on the 31st of December 1967 for his quarterback sneak with just 13 seconds remaining of the game.

He was named All-Pro four times and named for the Pro Bowl four times. He was also honored by The Packers who retired his uniform number (15) and he is tied with Brett Favre as they both played 16 seasons for The Green Bay Packers. Did you know that he was selected by the Green Bay Packers in the 17th round of the 1956 NFL draft? There were 200 rounds over all. If you want to wager on this year’s NFL Drafts, find a promo code for William Hill here! 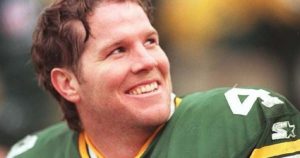 Brett Favre is known for breaking the all-time record of 148 by John Elway when he managed to add another 12 wins, totalling 160. Favre had an unbelievable starting streak as a Quarterback with more than 253 games starting on the field. He received the MVP award from 1995 to 1997 and was named All-Pro 6 times and named for the Pro Bowl 9 times. He ties with Bart Starr for the most seasoned played for the Green Bay Packers but played in 255 games, which is the most of all time. Favre shattered Dan Marino’s all-time record of 420 with 442 passes during his career and threw 61,665 yards in total – more than Dan Marino’s 61,361 yards.

As much as Forrest Gregg played a part in the offensive line during the Lombardi years, Ray Nitschke played a similar role for the defensive line. He was named All-Pro 6 times, but for some reason was only named for one Pro Bowl. He was chosen though late in the third round (36th overall) of what is considered the greatest draft in the franchise’s history. He was awarded MVP in the 1962 NFL championship game and is found in both the Packer Hall of Fame and the Pro Football Hall of Fame. The Green Bay Packers have honored Ray Nitscke by retiring his uniform (66) and has two outdoor practice fields named after him across from the Lambeau Field.