(from a friend of Packernet)

Occasionally, when I’m playing at my favorite online casino, FairGo online casino, I wish that someone would create a game that fully described the long-standing rivalry between my hometown Chicago Bears and the Green Bay Packers.  I am not like many Bears fans who hate the Packers.  I just want the Bears to win every game against them and to always be much better than the Packers.

Since the 1963 season where the Bears finished first in the Western Conference, thanks in large part to the suspension of the Golden Boy, Paul Hornung, for gambling, the Bears have had far more hard times than good times.

The Bears won the Super Bowl in the famed 1985 season with what may have been the best single season defense in NFL history.  The Bears next made it to the Super Bowl in 2006 behind their first true gunslinger quarterback, Rex Grossman, who proved to be far less successful as a gunslinger than the Packers’ own “mad Bomber”, Brett Favre.

Between 1963 and 1985 there was nothing but heartbreak and misery.  From 1985, there has also been little to brag about.  Then last year, Aaron Rodgers lead a furious second half rally to steal game one of the season and every Bears fan said “here we go again”.

However, 2018 ended on a far happier note despite the double doink field goal miss that cost the Bears the wild card game. 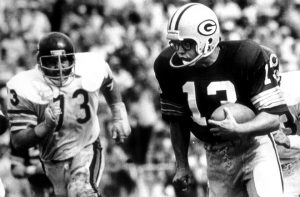 Green Bay Packers kicker Chester Marcol runs after picking up a blocked field goal against the Chicago Bears in 1980.

The Nature of the Rivalry

From the standpoint of Bears fans, the rivalry with the Packers is something unique in Chicago sports.  Chicago has five pro sports teams, the Cubs and White Sox in baseball, the Bulls in basketball, the Blackhawks in hockey and the Bears.

Cubs fans are used to the team losing in lovable fashion.  The Cubs play in the most beautiful baseball stadium in the world and fans still love going to Wrigley Field just to hang out, soak in some sun, and maybe watch the game a bit.  This is a bit harder to do in the era of high-prices and night games but here is a story of what the Cubs really mean to Chicago.

In the mid-1970’s, on the second day of the season, the weather was an amazingly balmy 70°.  At game time, there were a few thousand people in attendance but within one half hour the entire park filled up with men and women in suits.  The weather was great for April, the game beckoned, so thousands of Chicagoans decided to chuck the afternoon in the office and came to the game!

The team that brings out the overwhelming hatred of Sox fans is the Yankees.  If the Sox aren’t good, which is most of the time, at least the Yankees should be bad too and if the Yankees are good, Sox fans can easily ignore baseball because it’s summer and there are many other things to do.

It’s nice when they win and it’s okay if they lose.

Before we describe the deep importance of the Bears to Chicago, here are two great Bears-Packers stories.

Irv Kupcinet was a long-term gossip columnist and television talk show host in Chicago.  Before he became a newspaperman and a tv “star” he played on the offensive line for the Bears in the 1930’s.  His career ended quickly and he became an NFL referee.  One Sunday, when Kupcinek was working the game as a ref, the Packers were in Chicago to face the Bears and had a fourth down and inches.  They went for it and failed to pick up the first down.

This young man was a promising defensive tackle in the late 1960’s but came to camp way overweight in 1969.  That year, the Bears went 1-13.  The most memorable event of the year was when, on a rainy Sunday at home, Frank Cornish was spun around at the line of scrimmage and fell splat face first in the mud.

A highlight of the season and a symbol of the Bears over the years.

The Bears and Chicago

So, if any of the other professional teams aren’t good Chicago fans can shrug it off.  When the Bears aren’t good, it feels like the entire city is going 1-13 and falling splat face first in the mud. 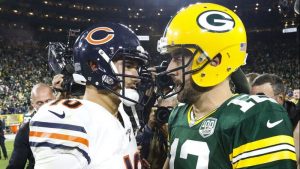 In that same 1-13 season, on the last ignominious day of the season, with the temperature a warm 10° and falling three forlorn vendors sat shivering waiting for the fans to come so they could start selling their food items.

They wrote a parody to the legendary Bears fight song that still rings true even though Bears fans have high hopes for the upcoming season.

Make every play clear the way to victory.

Put up a fight with a might so fearlessly,

We’ll never forget the way you thrilled the nation,

And let them know why you’re wearing the crown.

You’re the pride and joy of Illinois,

Here is the remake those woe begotten vendors came up with in the cold and howling wind one December day in 1969.

Make every play lead the way to as safety,

We’ll never forget the way you fooled the nation,

With your team imitation,

You’re number one in being bums,

You’re the pride and joy of the Halas boys

Chicago Bears, give up!

This year Bears Nation has its hopes high but its expectations low as usual.  The Bears’ schedule is hard.  The division is improved all around.  And the Packers still have the proven Aaron Rodgers while the Bears have the unproven Mitch Trubisky.

At least the Bears quarterback has a Chicago-sounding name!

The greatest rivalry in professional sports will kick off in only three months.  Rev your engines, ready, set, go, the heart and soul of one of America’s most dynamic cities ride on beating the Packers!