Another take on the division…

Even though NFL teams haven’t even started full training camp, we feel as though the NFL season is fast upon us!  Much has changed since the 2018 season ended and every team—even the Lions—has high hopes for the upcoming season.

We’ll go over the great expectations for each team and a reasonable assessment of their true chances to get to the Super Bowl.  We feel like we are embarking on a journey to a jackpot casino: the challenge is daunting, the unknowns are many, and the outcome is out of our hands but we hope for that one great moment when the forces of football heaven smile upon us!

A lot of people think that this is the strongest division in the league.  If that is so, then playing six games within the division might mean that the second place team won’t make the playoffs.  With that in mind, we examine each team’s chances of winning the division. 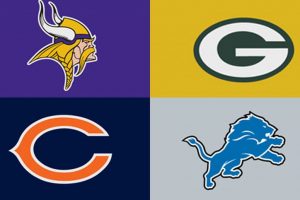 The schedule is tough for every NFC North team.  The Lions play the Chargers in week two and the Eagles in week three.  These early games will test the offensive line primarily.  Without good pass protection, the Lions can’t hope to score enough points to win against strong opponents.

Matthew Stafford has suffered from uneven offensive line play in the past.  The big question for him is whether last year’s regression is a sign of more regression to come or does he have enough left to get the Lions to the playoffs?  He doesn’t have enough mobility in the pocket to compete in this division.

The Lions’ defense will be good but not great but it is not a scoring defense.  In fact, only the Vikings and the Bears have scoring defenses and they make the difference in this division.

By their bye week, the Lions might have a 1-4 record with all four losses coming after a win on opening day against the Cardinals.  If that is the case, there may be a massive overhaul mid-season for the Lions.  We don’t see Detroit in the playoff picture.  The only caveat is that they are quite capable of winning divisional games so the Packers have to be more than fully prepared for that first game after the Lions’ bye week.

This is a snakebit franchise.  They went to four Super Bowls in the Bud Grant era and lost all of them because they became too passive in the big game.  They traded away a full decade of competitiveness in the Herschel Walker trade.

The days when teams went to Minneapolis in December or January and suffered with below zero temperatures are gone.  This was once the team’s greatest advantage.

Last year they signed Kirk Cousins to another long term contract.  Cousins is a quarterback who needs great coaching to succeed.  He may be the new Jay Cutler, a quarterback who can’t do it on his own, needs great play from his teammates, and great coaching, none of which Cutler had in Chicago and Cousins didn’t have last year in Minnesota.  Furthermore, he is already 30 years old.  Minnesota certainly reached when they signed him.

The Vikings defense was very good last year but not as good as the year before.  Here again there is the question of regression.  Football is such a taxing sport that regression is always a problem.

The Vikings could win the division.  Or they might finish 8-8.  Once again, as far as the Packers are concerned, the divisional games will probably tell the tale of which team goes to the playoffs.

This is the team that has everyone worried.  They got a new coach last year who seems to know how to relate to his players, how to run a modern offense, how to teach, how to organize a team, and how to delegate authority.

He is the Kurt Warner of coaches having had his greatest success in the Arena League before landing a spot on Andy Reid’s staff in Kansas City.

The Bears had the best defense in the league.  Regression is entirely not an issue with this defense.  Everyone is either young or in their prime.  Everyone is back from last year except Adrian Amos who the Packers signed.  He is being replaced by Ha Ha Clinton-Dix who underachieved with the Pack.  He has a lot to prove.

The Bears’ defense has superstars, near superstars, and established stars.  Their new defensive coordinator is Chuck Pagano who has a much more aggressive defensive philosophy than did Vic Fangio last year.  Fangio is now the head coach in Denver.  When Pagano lets this defense loose, it could make people remember the great defenses of the past.

The quarterback is the big question mark for the offense.  You really have to throw out his first year in the league under John Fox.  In his second year, last year under Matt Nagy, Mitch Trubisky progressed from week to week.  The Bears started out 3-3 and finished 12-4.

He is still far from being an elite quarterback but he is genuinely on the cusp of greatness.  He has the right coach, the right offensive philosophy, a great offensive line, excellent wide receivers, a revamped running game with runners who can both run and catch, and tremendous running ability of his own.  In addition, he is the most elusive pocket quarterback in the division by far.

From the Packers point of view, the best thing about this year’s Bears is that they have one of the hardest schedules in the league.

Last year, we saw many signs of regression.  The defense was no longer up to the challenges of a long season.  The offense also lacked depth.

The Packers drafted ten players and hope many of them will help the team from the earliest games.  The team will certainly be younger this year than it was last year.  It is impossible to evaluate the Packers in terms of their new rookies.

The Pack signed two edge rushers: Za’Darius Smith and Preston Smith.  Za’Darius had a breakout season last year.  He is a fast, powerful OLB but can he sustain last year’s success?  Preston Smith has less raw talent than Za’Darius but he is still a formidable OLB.  Together, the Smiths bring a massive edge rushing upgrade to the Packers defense.

They will need a lot of backfield penetration to offset Mitch Trubisky’s elusiveness at quarterback.

The addition of Adrian Amos at safety is more a plug-in change than a push for a big improvement.  Amos is a solid player but he is decidedly not spectacular.  He won’t make any interceptions unless the ball is thrown right at him and is uncontested.  Still, he fits into the system well, follows his assignments, and makes very few mistakes.

On offense, the key is always Aaron Rodgers’ health.  If he’s healthy, the offense will score points.  Davante Adams is a top level receiver and Aaron Rodgers has the ability to make lesser receivers seem much better than they really are.

The Packers have a new head coach in the mold of modern offensive-minded head coaches.  If Matt LaFleur and Aaron Rodgers can establish the chemistry that was lacking in the last few years between coach and player, the offense may thrive.

This is a Green Bay Packers fan site so we won’t predict that the Packers will fall in 2019.  It is very clear that the Bears pose the greatest challenge to the Packers in the battle for the NFC North title.

Realistically speaking, the Bears have by far the most upside of any team in the division.  They also have a very tough schedule.  And the NFL is still the NFL.