The Green Bay Packers wrapped up the NFC North Division title with their first win in the new Vikings’ stadium. All I can say is this Packers team never ceases to amaze. They don’t appear to be good at any position but with three exceptions, they don’t lose games. And now they only need to win four more to be Super Bowl Champs (shaking my head). 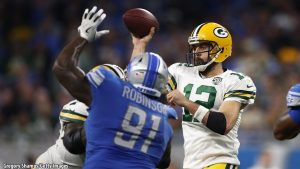 Dominating the Vikings the way the Packers did was very impressive. Of course, the first thing I saw from the media was it was another ugly win for the Packers. When did the Packers turn into Trump? I mean, really? The Packers outgained the mighty Vikings 383-139. Exactly what part of that is ugly?

I simply cannot believe the resiliency of this team. I have said that before. The thing is, from here on out the only time resiliency comes into play is in game. After Sunday you don’t have a week to bounce back. Resiliency don’t mean shit.

Unlike the the last few years, I do not have the feeling the Packers will blow this opportunity. I think I have confidence in this team, which scares the hell out of me. Two weeks ago I said the Packers-Bears game was the biggest game of the year thinking the Packers would lose to the Vikings. All of a sudden beating the worst team in the division is all that stands between the Packers and possibly the No. 1 seed in the NFC.

I think I have confidence.