It appears that TV’s newest sensation is a die-hard fan of the Green Bay Packers, or so his boss will have you believe.

Baby Yoda, the breakout star of Disney’s The Mandalorian, took the internet by storm after emerging as a character on said show and has been the subject of thousands of memes to date. The internet loves it some Baby Yoda. 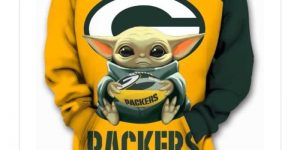 Disney CEO Bob Iger doubled down on the revelation of the endearing character being a Packers supporter over the weekend, posting an image of the young, unknown species holding a green and yellow Packers football just ahead of the NFC Championship match against the San Francisco 49ers on Sunday night.

“Game time!! Let’s go @Packers,” he wrote as the tweet’s caption. The Disney chief had tweeted a similar image after Green Bay advanced in the Playoffs by beating the Seattle Seahawks on January 13.

Baby Yoda is undoubtedly the face of Disney’s launching of its streaming service Disney+, from which The Mandalorian could be viewed. The show, Disney’s first-ever live-action television series, was expected to be the biggest seller for the new service and it has proven to be just that since the November 12 launch. Disney+ has over 20 million subscribers and, at $6.99 a month, there’s enough content to urge fans to get in on the action.

The youthful version of the popular Jedi sage has been a welcome addition to TV and the internet at large. And that he’s a Packers fan may very well get the team some new supporters.

Unfortunately for Iger and Yoda, the Packers were not able to get past the 49ers on Sunday night, losing 20-37 to the San Francisco outfit thanks to a stellar performance from running back Raheem Mostert. The 27-year-old went for 220 yards and four touchdowns on 29 carries to help send the 49ers to the Super Bowl for the first time since 2013, they’re now within a game of matching the New England Patriots and Pittsburgh Steelers for championships at six.

They head into the big game at 21/20, with Patrick Mahomes and the Kansas City Chiefs favored 4/5. As it stands, the Chiefs command 63 percent of all bets made on the upcoming showdown as it relates to the winner, while there are plenty of other NFL odds being offered by the bookmakers.

The Chiefs are 4/5 to be the first team who gets on the score sheet, with the 49ers at 10/11. Damien Williams is 6/1 to score the game’s first touchdown while Mostert’s virtuoso performance gets him in at 7/1. Travis Kelce and Tyreek Hill are also 7/1 and George Kittle is in behind at 10/1.

The Packers are set to miss out on the Super Bowl once again but the signs are definitely encouraging after their first season under Matt LaFleur. Even after a horrendous first half on Sunday, they continued fighting and gave all they were able to. The fans were certainly appreciative of the effort and a few of them even turned out at the airport at 3 am to welcome the team back home. We imagine it’s something Baby Yoda would have liked to do himself if he were real.