The Green Bay Packers were an ass kicking away from the Super Bowl last year. Now they have an aging Hall of Fame quarterback and higher expectations for this season. They also have a lot of holes to fill for such a team. And third year general manager Brian Gutekunst’s honeymoon is over. The pressure is on the young GM after two ho-hum years at the helm. 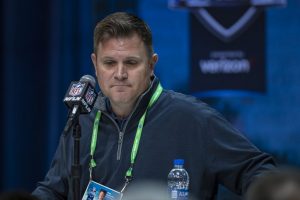 Gutekunst’s first draft is about to go down as one of the worst is history. The only player any good is cornerback Jaire Alexander. The rest of the class is pretty much worthless, especially the three wide receivers taken. Two are complete busts and one missed last year due to injury. Punter JK Scott has shown signs of being good, but is woefully inconsistent and failed miserably on the big stage last year. A better bet would be looking for a bonus code and playing the casino. No sports going on anyway.

Gutekunst followed up that horrible draft by going the free agent route last yea. He signed the Smith Bros., safety Adrian Amos and guard Billy Turner. He also had what has the makings of a good draft last April. While we don’t know how good first round pick Rashan Gary will turn out, it does look like the other first round pick, safety Darnell Savage Jr. is the real deal.

Certainly Elgton Jenkins looks to be a longterm starter on the offensive line and tight end Jace Sternberger looks like he has a chance to be the Packers long lost tight end. Later picks like defensive lineman Kingsley Keke, who got some playing time late last year, might turn out OK. And, for some reason unbeknownst to me, I still think running back Dexter Williams is going to be a player. Also curious about linebacker Ty Summers.

The Packers desperately need help at wide receiver and free agent Devin Funchess will certainly help. In fact, he could be a sleeper free agent signing. He was pretty good in Carolina and had a fluke injury last year with the Colts. Certainly a better option than Geronimo Allison.

Gutekunst has a team on the cusp, can he get them over the hump?