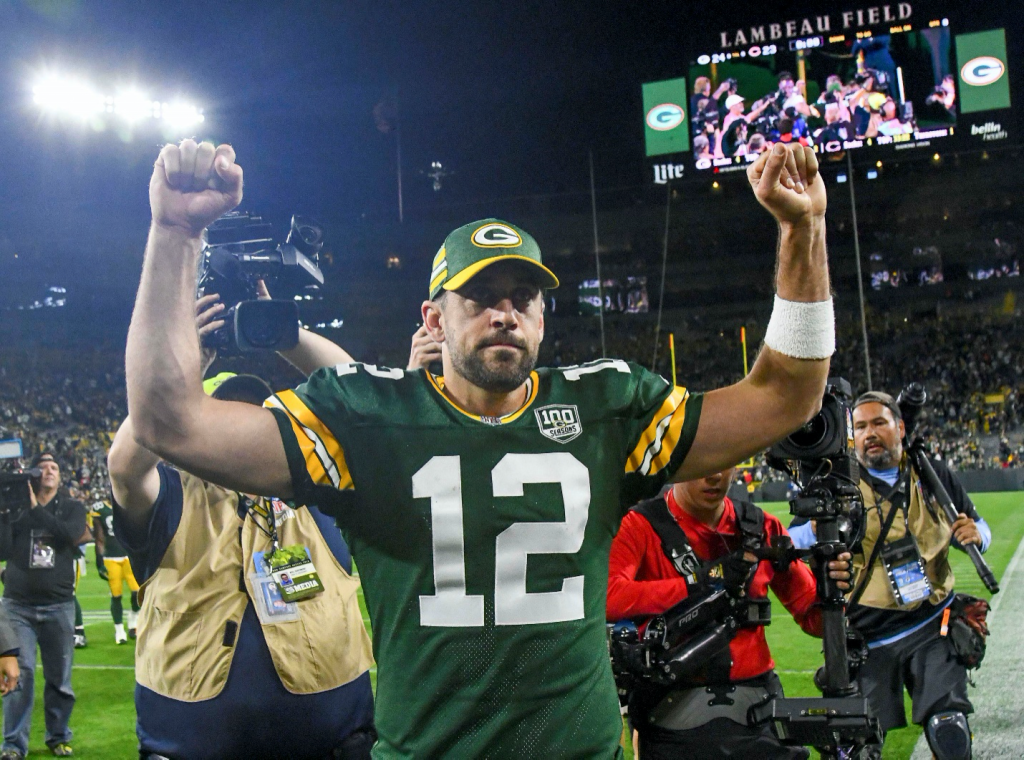 The Green Bay Packers have been involved in some of the most incredible comebacks in the NFL’s history. Some of the games are so memorable that they have earned nicknames. Interestingly, Aaron Rodgers was involved in nearly half of the games we’ll mention in this article.

Does that make him the comeback king? Discover below.

Every Packers fan remembers the season opener of 2018 vividly. It was a Sunday night game against the Chicago Bears that destined to be a defeat, an embarrassing one for that matter. QB Rodgers had already been carted off the field and there was little hope he would come back.

The Bears were having an enjoyable evening with a 20-0 lead by halftime. Miraculously, Rodgers was cleared to go back in the game and everything changed.

First, he completed a 39-yard touchdown to Geronimo Allison. Then he doubled his score with a 12-yard touchdown to Davante Adams to pull the Packers to 20-17. After a Bears field goal Rodgers threw a dart to Randall Cobb who turned it into a 75-yard TD and a Packers victory.

Amazingly, this was the first time in history the Packers overturned 17-point deficit by the fourth quarter.

Call it a fluke or creating own luck. The game against the Detroit Lions in December 2015 is one for the books. The Lions had a two-point lead, 23-21, and there was no time left except for a free play thanks to a penalty on the Lions on what would have been the last play of the game.

Were this match played in this age of in-play betting, it would have made gamblers a lot of money. That’s because the odds of a comeback with less than a minute before the final gun are unbelievable generous.

Unfortunately, most people in Packer Nation can’t gamble on sports to date. Get more info at online-gambling.com, including a detailed guide to online gambling in Wisconsin.

Back to football, December 15 was yet another Rodger’s night. In his usual style, the QB rose to the occasion and tossed a deep rainbow that tight-end Richard Rodgers caught at the goal line for the touchdown. The dagger as the Packers who won 27-23.

Unsurprisingly, the last-minute pass wasn’t Rodger’s only highlight of the night. Green Bay started the game with a 17-0 deficit in the first quarter. They trailed 20-0 by the third quarter. But when it was over the Packers had avoided a season sweep by the Lions.

Long before anyone thought people could stream football online, the Packers were involved in one of the NFL’s best comebacks. It’s also the biggest deficit Green Bay has overcome in a regular season game.

Here’s what happened. The Packers were helpless in the first half. They conceded point after point, including an early touchdown from debutant Bert Jones. In the second half, Green Bay took control of the match and proved that nothing is impossible in football.

QB Lynn Dickey, who had thrown three interceptions in the first half, righted his earlier mistakes with three touchdown passes. On the flipside, RB Eddie Lee Ivery rushed for two touchdowns and ran for 109 yards to help turn a 23-0 trail into a 35-23 win.

December 15, 2013, looked like yet another football night in which the Packers were going home with a loss. The Dallas Cowboys, led by Tony Romo looked well on their way to victory over the Matt Flynn led Packers, leading 26-3 at halftime.

In the second half, Green Bay did what it does best: it looked past the deficit in hand and chased a victory. This time, though, it wasn’t Rodgers spearheading the come from behind. Instead, it was running back James Starks, WR James Jones, Jordy Nelson and tight end Andrew Quarless who initiated the comeback.

The game ended with the Packers having scored touchdowns in five consecutive possessions and taking the lead with 1:31 left. It was a much-needed win for the Packers as they went on to win the NFC North division.

And you remember how they achieved that feat? Rodgers to Cobb in the regular season finale against the Chicago Bears.

There are very few times the Packers wore their iconic white jerseys at Lambeau Field in the ‘80s. September 17 against the New Orleans Saints was one of these days. The game started badly for the hosts as they fell behind 24-7 by halftime.

In the second half, RB Brent Fullwood helped Green Bay get back into the game with his second touchdown. Then QB Don Majkowksi tossed a pair of touchdowns to Ed West and after a Saints field goal the Packers were behind 34-28 with 2:21 left. It took Majik all of a minute and five seconds tie the game with a TD to Sterling Sharpe. Chris Jacke’s extra point gave the Packers the lead.

But before the Packers could celebrate, they faced a last-minute play that nearly cost them the game. Luckily, Van Jakes made an interception that sealed the comeback.

The New York Jets were having their way with Green Bay in the first two quarters of the second week in 2014. QB Geno Smith had completed two touchdowns in the game by the time the Packs began to fight back.

Mason Crosby’s three field goals in the second quarter gave Pack fans hope the team could close the game. Then Randall Cobb caught two touchdowns and suddenly there was hope in winning the game. Rodgers hit Cobb for an 80-yard TD with 2:08 left to steal the win.

After winning their first four games of the season, the Packers weren’t ready to take a loss. But after Detroit’s massive Lions roared to a 21-3 halftime lead, most fans thought the game was over.

In the usual Green Bay style, the offense and defense turned into a robust team as they scored 21 points in the third quarter to take the lead. The Packers defense shut out the Lions in the second half and the Packers won 31-21. The victory gave them a 5-0 record.