The Green Bay Packers endured an all-too familiar ending to the 2019 season, failing to reach the Super Bowl following their defeat in the NFC Championship Game.

It was a fine first season for head coach Matt LaFleur, but the pressure is building now in his second campaign to prove that he has more to offer than the final years of Mike McCarthy’s reign. The problems were similar to that of his predecessor.Green Bay’s defense could not stand up under duress against a quality team when it mattered the most, while the offense lacked the potency to go score-for-score with the San Francisco 49ers. The franchise did not go out of their way to solve those issues in the off-season. 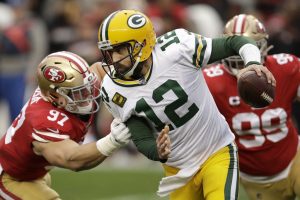 The Packers appear to be heading down the path of the New Orleans Saints – both in their style and their recent success. The two franchises won Super Bowls one year apart – with the Saints triumphing in 2009 and the Packers a year later in the 2010 campaign. Since then, both teams have known nothing other than frustration and disappointment in the post-season.

Green Bay’s recent fortunes in the playoffs are reflected in the minds of the bookmakers, being backed in the NFL odds on bet365 at 25/1 to lift the Vince Lombardi Trophy in 2020. Their roster looks relatively weak on offense compared to their NFC rivals, while they’re a long way from matching the explosive nature of the Kansas City Chiefs and Baltimore Ravens in the AFC.If Aaron Rodgers wanted quality additions in the off-season he would have been crushed, to say the least, to see the franchise draft his heir apparent in Jordan Love over a top-tier wideout. Their offense will once again have to flow through Davante Adams and Aaron Jones – again raising comparisons with the Saints and their tandem of Michael Thomas and Alvin Kamara. 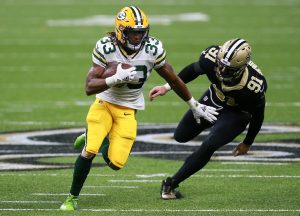 Their respective systems work well during the regular season and in games where there is a relative amount of control. However, when scores are needed with regularity and explosive plays are required, the Packers have lacked that intensity. Rodgers has produced brilliance in the past – notably in 2016 against the Dallas Cowboys on the road and against the Seattle Seahawks in the Divisional Round last season.

The 36-year-old can get the best out of mediocre talent but, in the clutch moments, Rodgers cannot be forced to do it himself. When teams can clamp down on Adams and prevent the running game from being a factor, the Packers as they stand at the moment, are not a threat.

It’s the same blueprint teams have been using against the Saints.

Unless Green Bay’s defense makes significant strides forward to dominate their opponents, or there is growth from the receiving corps, the 2020 season may be a case of Groundhog Day for Green Bay. LaFleur’s men will be good enough to secure a playoff berth, but when games are taken out of their control by teams of a similar or stronger ilk, trouble will lay in wait for the Packers in January.