Week 9 was quite the whirlwind. The NFC East features a three-way tie for second place with the New York Giants, Washington Football Team, and Dallas Cowboys all sitting at 2-7. The Minnesota Vikings (3-5) are on a two game winning streak and could be poised to make a mini-run at the seventh seed. Don’t forget an absolute beatdown by the New Orleans Saints over the Tampa Bay Bucs.

Week 10 will feature another round of key games as all teams are past the halfway point in the season. As it stands, the top seeded teams in the NFC are Saints, Seahawks, Packers, Eagles, Bucs, Cardinals, and Rams. As we continue to monitor the playoff structure, these three games will be the games to watch when it comes to shaking up the playoff bracket.

The NFL Playoff Bracket 2020 could be completely turned upside down if the Giants go on a winning streak. When we mean winning streak, we mean just winning two games in a row. The Giants are coming off a 23-20 win over the Washington Football Team that technically puts the team back in the playoff hunt. With a home game against the Eagles, the Giants could tie the divisional leader for wins with a victory.

Wayne Gallman Jr. and Alfred Morris each rushed for over 60 yards, while Daniel Jones completed 23 of 34 passes and a touchdown. The Giants lost a heartbreaker to the Eagles the first time around and Carson Wentz has looked absolutely horrible. This is the Giants game to lose. 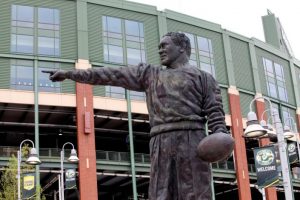 The Jacksonville Jaguars have lost seven games in a row, so you are probably asking yourself why anybody would want to watch this game. For starters, history shows that when a team is on a long losing streak, they are due for a win. Take a look at the New England Patriots and New York Jets on Monday Night Football. The Jets (0-9) nearly took their first win of the season, but a game-winning 51-yard field goal by Nick Folk kept the Jets on the path towards the No. 1 pick.

The Packers have already had one slip up this season and that was two weeks ago against the Minnesota Vikings (3-5). The NFL is a wild place to be and this screams potential upset. The Packers are just one game up on the Chicago Bears in the division and need to take care of this game. From a game aspect, Davante Adams is on a tear and has six receiving touchdowns in his last three games. Could we see more greatness from this budding star?

This game has huge implications for both teams. For starters, the Vikings are on a two-game winning streak after knocking out the Packers and Lions. Running back Dalvin Cook is putting the team on his back, scoring six touchdowns in a stretch of two games. The Vikings were a playoff team a year ago, but started off slow. A win over the Bears would mean the Vikings are back in the playoff hunt.

For the Bears, this is a must win game. The Bears have dropped three straight to the Rams, Saints, and Titans. The offense has looked like the league’s worst offense and there is widespread support for head coach Matt Nagy to stop calling offensive plays. If the Bears lose this game with Nagy calling plays, Chicago is going to go up in turmoil.