The Green Bay Packers got to 11-3 with an ugly victory over the Carolina Panthers Saturday. It was their worst offensive performance since the Tampa Bay game in week six. Having time to let it sink in I’m not as upset as I was last night when the game ended. All said and done, the Packers ground out a win they had to have and kept their hopes of the number one seed alive. 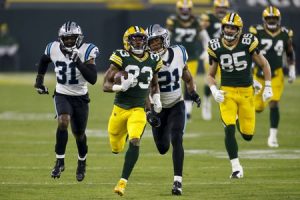 The Panthers brought a scrappy team to Lambeau Field and had nothing to lose and everything to gain. Statistically they don’t really stand out on either side of the ball but somehow, with the exception of Tampa Bay they have been in every game. They only lost by two at Kansas City, and by three at New Orleans. So in that case the Packers ought to feel good about beating them by eight. I don’t see any reason the odds of the Packers winning the Super Bowl would take a hit. If you are looking for a place to bet online there are many places to go, like TVG Oregon, for example. Many states now allow sports betting.

No doubt the Packers’ offense struggled mightily in the second half. I think it was head coach Matt LaFleur’s worst game of play calling this season. He wasn’t good in Tampa, either, but the difference is that time the Packers were playing from behind most of the game. This time the Packers had many chances to put the game away but too many bad play calls doomed them. I mean, how many receiver screens do you have to have get stopped for no gain before you stop doing it?

The Packers ran the ball down the Panthers throat the first three drives of the game. Then, when Jamaal Williams left the game with an injury the offense came to an abrupt halt. I don’t understand why the Packers haven’t been able to coach up AJ Dillion enough to give him meaningful snaps in a game. His talent was on display the one carry he did get, and 18-yard scamper. Would love to see him get a shot if Williams is going to be out for a while.

The Packers’ defense gave up 367 yards but held the Panthers to 4-of-12 on third down and tallied three more sacks. They also forced the game turning play when Panthers’ quarterback Teddy Bridgewater fumbled at the goal line. And if you only give up 16 points in this league chances are you are going to win. The defense continues to be adequate, but a real test will come next Sunday against the Tennessee Titans and Derrick Henry.

The Packers have no time to look back, though, they have two extremely tough games ahead of them. First up is the aforementioned Titans, who steamrolled the same Detroit Lions the Packers struggled with last week. Then it’s the resurgent Chicago Bears in Chicago. Not an easy path to the number one seed by any means.