The Green Bay Packers put together their best performance of the season Sunday night, walloping the Tennessee Titans 40-14. If the Packers were looking to make a statement by beating the 10-win Titans, they were successful. It was the first win over a team with a winning record since week three in New Orleans. It is also a sign that the Packers are coming together just in time for the playoffs.

The win sets up a huge game in Chicago with the number one seed for the taking. A win would give the Packers the only bye in the playoffs and home field advantage throughout the playoffs. It won’t be easy, my friends. The Bears are suddenly on fire under quarterback Mitch Trubisky. They have scored 30, 36, 33 and 41 points the last four games, winning the last three. Just like that they are in a win and they get in position. If you saw that coming I hope you made a visit to wish casinos about six weeks ago. The Bears looked dead in the water and you probably would have gotten good odds they wouldn’t make the playoffs. It’s been quite a turnaround for the Bears and they would like nothing more than to beat the Packers to get in, even if it means a trip to Lambeau the following week.

Against the Titans the Packers introduced a new weapon – running back AJ Dillon, the six-foot, 247 battering ram with 4.5 speed. The Packers took a lot of heat for selecting Dillon with their second round pick last April, but maybe they knew what they were doing. Nobody wants to keep Aaron Jones more than me, but considering the struggles the team seems to be having reaching a new deal with him, it’s nice to see they might have a replacement already on the roster. 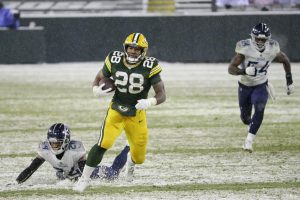 Dillon was an absolute beast in his first extended playing time. He brings a totally different style of running than Jones does. It is going to be very interesting to see how much of a role Dillon plays the rest of the way, especially with Jamaal Williams possibly returning soon. The more weapons the better this time of year and Dillon is definitely a weapon.

Of course, the Packers’ usual stars shined again. Aaron Rodgers is one game away from locking up his third most valuable player award after taking apart the Titans. He had as many touchdown passes as incompletions – four. One week after being frustrated and openly showing it, wide receiver Davante Adams bounced back big time with three more touchdown catches and 142 yards. The offense is back, baby!

And so is the defense. Wow, what a performance they gave. Holding Derrick Henry to 98 is shutting him down. He was never a factor. The Packers were able to get the Titans to third down a lot early on and each time Henry would leave the field. Why you would take your best player off the field like that is beyond me. It’s third-and-four and Henry averages over five yards a carry and you take him out? Oh well, what do I know? But glad they did it.

The Packers’ had pressure on Ryan Tannehill all night and picked him off twice. Other than two drives, one at the end of the first half and the other to start the third quarter, the Titans struggled to get first downs, much less score. If the defense plays like this the rest of the way the Packers will be in good stead.

The path to the Super Bowl will be decided in Chicago. Bart Scott me – “can’t wait!