This has been a strange year by all accounts, and the NFL season certainly fell right in line. The Green Bay Packers and Tampa Bay Buccaneers will face off in the NFC Championship game Sunday having only beaten three teams with a winning record – combined. The Kansas City Chiefs beat five such teams themselves. 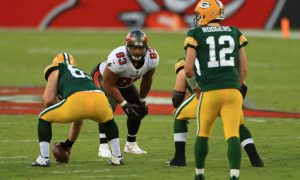 Tampa Bay went 1-2 against teams with winning records, beating the Packers and losing to the Rams and Chiefs. The loss to the Chiefs left the Bucs at 7-5 and in danger of not making the playoffs. Thanks to four patsies down the stretch, including the Falcons twice, the Bucs made the playoffs as a wild card. The Packers went 2-1 against winning team. Losing to the Bucs and beating the Saints and Titans. Now Aaron Rodgers will have the chance to make it to his first Super Bowl in 10 years and according to Sports Betting Dime they are favored to beat Buccaneers by 3.5 points. That means these two teams are pretty damn even with the Packers only laying the usual home field advantage of three points or so.

I think the Packers have improved greatly since that game on October 18th, especially on defense. The Packers won their first four games mostly because their offense was scoring at will. Defensively they were middle of the pack and gave up over 30 points twice. In hindsight, that beatdown in Tampa should have come as no surprise. It took a couple of weeks and another loss before the Packers started to turn things around.

The turnaround started when the Packers avenged last year’s NFC Championship game loss in San Francisco November 5th. Sunday they can avenge another ugly loss and get a major monkey off their backs. All from the comfort of home.