The Green Bay Packers easily dispatched the fading Pittsburgh Steelers 27-17 Sunday to move to 3-1. They remain in first place in the NFC North by beating a broken Ben Roethlisberger. While the Steelers’ defense can still be formidable, their offense is pathetic. They made the Packers’ defense look good! 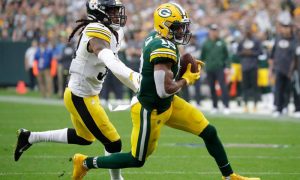 I think this might have been the Packers most complete game of the year. The Packers played well on both sides of the ball, especially while the game was being decided in the second and third quarters. The Steelers did have success in stopping Davante Adams from gashing them. And the Packers were already without Marquez Valdes-Scantling due to injury. So it was Randall Cobb who benefitted from the extra attention given to Adams. Cobb took advantage for two touchdowns and several big third down conversions. He showed why assistant GM Aaron Rodgers brought him in.

On defense the Packers did what they had to do against an offense like that. They were able to get off the field on third or fourth down and even had another two turnovers. And that was without star cornerback Jaire Alexander, who left early with a shoulder injury. They were already without starting linebacker Krys Barnes and cornerback Kevin King. Injuries are taking its toll on the Packers’ defense.

Overall a solid win over a team they should beat. I don’t think next week will be so easy.