The Green Bay Packers face the Seattle Seahawks Sunday afternoon and when they do it hopefully brings back a little normality to the team. Quarterback Aaron Rodgers will be back under center and we can finally get past the media firestorm he created with his positive COVID test last week. It’s time to get back to football. 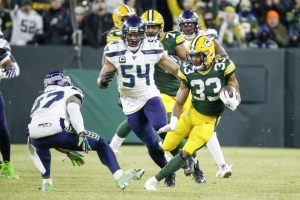 Nothing against Jordan Love, but the Packers certainly would have won the game last week with Rodgers at quarterback. Unfortunately a Halloween party prevented a Rodgers-Mahomes dual that may now never happen. The Packers did have a chance to win the game with Love at the helm but special teams and a poor offensive game plan doomed them. Special teams are going to be special teams, but the offense should be better this week.

The Packers have never had a two-game losing streak under Matt LaFleur but if they are going to do it this week would make sense as the first. The last two weeks has been a huge distraction for a team with their eyes on the Super Bowl. And their quarterback hasn’t taken a snap in practice or a game since October 28. It should be interesting to say the least.

The Packers are still among the favorites to represent the NFC in the Super Bowl even after Odell Beckham Jr. signing with the Rams. Most sports books and some more sites do not think the recent distraction will affect the Packers.

Defense rises to the occasion

After all the bitching I did about Joe Barry and his defense, I have to admit the defense is looking pretty good these days. Yeah, the Chiefs aren’t the Chiefs of old, but with the Packers’ offense struggling and special teams non-existent, the defense kept the Packers in the game until the bitter end. They were one play away from giving Love a chance to win it in the end.

The defense will have to rise to the occasion again this week as the Seahawks are a big play machine. And with Russell Wilson leaving his imaginary huddle for a real one, the Seahawks will be full strength and fighting for their playoff lives.

The Packers can’t afford to slip up here with the Vikings and Rams on tap yet before the bye. I think we’ll see a very motivated Aaron Rodgers who has his full arsenal of wide receivers available again. Packers take it 34-24.