The Green Bay Packers are about to wrap up another NFC North Division title and for the most part it was never in doubt. It will be the eighth division title in the last 11 years for the Packers. Only the Vikings in 2015 and 2017, and the Bears in 2018 were able to wrest the crown from the Packers. Of course, Aaron Rodgers missed most of 2017 and used 2018 to get rid of head coach Mike McCarthy. The 2015 Packers just weren’t very good and finished 10-6. 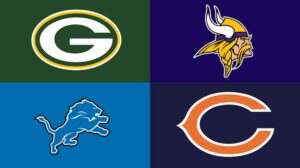 This year the North division has a grand total of 19 wins, tied with the AFC South for worst in the league. The NFC West leads the way with 28 wins, followed by the AFC’s North and West with 27. The latter two divisions have all four teams at or above .500. I don’t expect to see that anytime soon in the NFC North. While the Packers’ dominance isn’t on a level like New England in the AFC East, it is still pretty impressive.

A check of the best online casinos before the season certainly had the Packers as favorites to win the division again. At least when it was confirmed Rodgers would be back under center after his offseason hissy fit. Once Rodgers was back it was business as usual.

I really thought the Vikings would be better this year. I believe there were many national pundits who thought that as well. What a major disappointment they turned out to be. They have an overpaid quarterback who is basically a younger Ryan Fitzpatrick. And their defense can’t stop a nosebleed despite having a defensive genius at head coach.

The Bears got that fluke division title in 2018 with Mitch Trubisky at quarterback but are an atrocious franchise. They just can not get it right at quarterback or head coach. When they did have an excellent coach in Lovie Smith, they fired him in 2013 after a 10-6 season and have sucked ever since. They think they at least have a quarterback now in Justin Fields. I’m not so sure.

The Lions are simply the laughing stock of the league. Owners of the first 0-16 season in NFL history in 2008 they, like the Bears, fired the only coach who was any good when they released Jim Caldwell after posting winning records in three out of his four seasons as head coach. They were again flirting with another winless year until beating the Vikings last Sunday.

I used to think you needed to be battle-tested going into the playoffs, but the Patriots never were and they won six Super Bowls. I now think it is advantage to have an easy division in which you can wrap up a playoff spot early. It gives you so many more options down the stretch knowing you are already in the playoffs.

Hopefully the Packers start exploring those options after beating the Bears on Sunday night.