The Green Bay Packers enter the playoffs as the number one seed for the second consecutive year. They have overcome numerous injuries, COVID-19, and the first 17-game NFL season. And when the playoffs begin for them in two weeks they will probably get back two huge pieces of their defense in Za’Darius Smith and Jaire Alexander. So why do I get the feeling the Packers might be one and done this year?

I don’t know why but I just don’t get the feeling that this is a dominant Packers’ team. While Matt LaFleur has done an amazing job this season, it’s not like when they went 13-3 in 1996. That year the Packers were by far and away the best team in the league with the number one offense and defense. This year’s team has the number nine defense and number 10 offense. How this Packers’ defense is in the top ten is beyond me. Maybe that is the main reason why I don’t have a lot of faith this year. Seems like the the same old thing we’ve seen for years.

The American public thinks the Packers are the favorite to win the Super Bowl. They are followed by the Kansas City Chiefs and Tampa Bay Buccaneers. Maybe you agree. If so, a visit to www.betstation.com/betting-sites/ might be a good idea. There you’ll find the best places to get a piece of the action. The NFL now embraces betting and the game is as crazy as ever to predict. It’s a gold mine for the league.

Defense needs a shot in the arm

Since shutting out the Seahawks on November 14 the Packers’ defense is giving up 27.2 points per game. That is not going to get it done in the playoffs. Add throw in the fact that the Packers only takeaways in the last four games are the four Baker Mayfield interceptions on Christmas Day and you have a real problem.

The Packers will face one of four teams in the divisional round. Either the Los Angeles Rams, San Francisco 49ers, Arizona Cardinals or Philadelphia Eagles. The Packers have already beat all but the Eagles this year. I think the Packers are extremely fortunate they don’t have to face the Dallas Cowboys in their first game. The Cowboys have the tools to shred the Packers’ defense. And their defense isn’t too shabby, either. That said, I do think the 49ers have an excellent chance to upset the Cowboys. 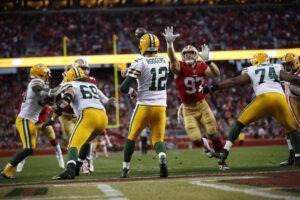 It hardly ever goes chalk, so that would seemingly rule out the Rams. And as scrappy as the Eagles are, I just can’t see them beating the Bucs. So it’s down to the 49ers and Cardinals. The Cardinals have gone 4-5 since the Packers beat them after winning their first seven games. They got smoked by Seattle at home last week. I think they are done. So that leaves the 49ers as my prediction for who the Packers will face in the divisional round.

It would an interesting matchup. The Packers barely beat the 49ers in week three and that was before the 49ers hit their stride. We’ll see what happens this weekend, anything can happen and usually does.