The Green Bay Packers made two moves in the 2022 NFL Draft to acquire wide receivers Christian Watson and Romeo Doubs. Following the trade of Davante Adams to the Las Vegas Raiders, the Packers’ receiving corps was in dire need of reinforcements. To say Aaron Rodgers was displeased would be an understatement. The loss of his best wideout, one of the premier players at his position in the entire league, spelled trouble. Rodgers’ frustration was evident in training camp as his fledgling receivers struggled to find their feet working to the high standards of one of the top quarterbacks of his generation.

Watson drew the ire of Rodgers in the first game of the season with his very first pass, dropping a sure touchdown against the Minnesota Vikings. It was a moment that encapsulated the Packers’ start to the season. Since then, they have endured a miserable campaign and have had to watch the Vikings turn themselves into contenders for the Super Bowl. It would be gut-wrenching for Packers fans to see Minnesota clinch the Vince Lombardi Trophy after so many recent near misses, with Kevin O’Connell’s side backed in the NFL odds at +1800 to win the crown.

It is difficult to say, the incident was a sliding doors moment for the two teams in 2022. Whereas Justin Jefferson and Kirk Cousins have been a thorn in the side of every team, Rodgers has been in a battle to inspire Watson and Doubs to break through their rookie struggles to blossom into the weapons that the Packers require if they are to return to the top of the NFC North and back into contention for the Super Bowl.

Although Watson had a low moment on the first play of the season, the 23-year-old has responded to coaching from Matt LaFleur and Rodgers and is flashing the talent that prompted the Packers to use a high second-round pick on the wideout. He had a breakout game against the Dallas Cowboys in week 10 of the campaign, notching three touchdowns in an upset for LaFleur’s men on the road.

Watson added a further two touchdowns to his tally against the Tennessee Titans before notching a score and 110 receiving yards in a defeat to the Philadelphia Eagles. He has become a threat in the endzone for the Packers, but the challenge now for the 22-year-old is to become a consistent player on every down. Watson has been used more for big plays rather than as a possession-receiver to move his team down the field. It may take time for him to learn the nuance of the position and the preferences of his quarterback, but the fact that he is slowly becoming a playmaker is encouraging.

Doubs was taken two rounds after Watson with the 132nd pick in the 2022 NFL Draft, but he appeared to earn the trust of Rodgers more quickly than his teammate. He put in an excellent performance in week three against the Tampa Bay Buccaneers, collecting eight receptions for 73 yards and a touchdown in a tight contest.

Doubs’ catches were crucial in defeating Tom Brady and company on the road. He notched his second touchdown of the season against the New England Patriots, although he also had a drop in the endzone that could have been costly.

Consistency and injuries are two of the key factors that hinder the development of wideouts in the NFL. Unfortunately for Doubs, his progress was stymied by an ankle injury sustained in week nine against the Detroit Lions. The 22-year-old does have the chance to get back on the field in the closing weeks of the campaign, and if he can pick up where he left off then he can take the positives from a bright rookie season into his second year.

Green Bay have to show patience with their young wideouts, especially considering they have already flashed their talent at different times during the season. It is easy to forget that it took time for Adams to develop into an All-Pro caliber wideout. In Adams’ rookie season, he had the chance to develop and learn behind Jordy Nelson and Randall Cobb at the peak of their powers. Both wideouts were outstanding and allowed Adams the time to learn the game. He notched only 38 receptions for 446 yards and three touchdowns. 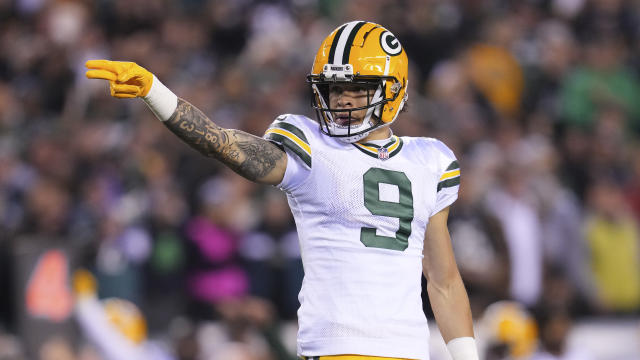 However, he did flash his potential with a sensational performance against the Patriots, the future Super Bowl champions, recording a 121-yard six-catch game to ease the pressure on Nelson and Cobb. He was then the star of the show against the Dallas Cowboys in the Divisional Round, notching 117 yards and a touchdown in a narrow triumph. Even though he was impressive, it took another two seasons for Adams to truly become the go-to target for Rodgers.

Watson and Doubs might not ever develop into the player that Adams has become, but his journey highlights the need for patience from the front office and indeed Rodgers himself.

The elephant in the room is whether Rodgers is willing to wait for the team to develop. The 39-year-old only signed a new contract in March 2022, but he would not be the first quarterback to be traded. The Packers may feel that it’s in their best interests to move on to get ahead in their rebuild. Rodgers has not been operating at the peak of his powers this season and his frustration has been evident. It might be best for both parties if the veteran could secure a trade to a team that is in a stronger position with their receiving corps.

This would give a new quarterback time to work with the receivers to grow and develop together. That could be Jordan Love, who connected with Watson for a touchdown in a defeat to the Eagles in relief of Rodgers. There would no doubt be growing pains, but it could be the start of a new era with a transition just as seamless as the last. The final weeks of the 2022 campaign could be very revealing when it comes to the near and long-term future of the franchise.