It’s easy to look ahead to next season with the draft drawing ever closer but while the Packers’ pick prospects are of a lesser profile than the big boys such as Joe Burrow and Tua Tagovailoa, it shouldn’t be forgotten that there is a reason for that. That reason is a decent campaign in 2019 that ended in NFC Championship.

Here we’re going to take a look at some of the factors that made it so bright.

A decade of home dominance

Okay, so this one isn’t solely dedicated to the 2019 squad but nonetheless the regular season saw eight home games with just the one loss against the Philadelphia Eagles, which ensured the Packers came through a 10 year period with the second best home record in the NFL with a 67-19-2 result – second only to the New England Patriots.

The 2020 fixtures have already been released and those teams due to come to Lambeau Field will be doing so with dread. Matt LeFleur meanwhile will be telling his players that another year of good home form will be a solid base to kick on to bigger and better things, with the Super Bowl surely the target.

The sight of someone being sacked is up there with the more enjoyable moments in a game so for Green Bay to have two such formidable linebackers playing on a regular basis is a real treat. The Smith duo, the two of whom joined the Packers prior to the 2019 campaign, both made it into the NFL top 10 for sacks with Za’Darius recording 15.5 (13.5 in the regular season) and Preston 14 (12) and made a combined 126 tackles across the season.

It will come as no surprise that those numbers are impressive, but they’re actually record breaking as never before have the Packers seen two players land more than 12.0 sacks each.

Davante Adams might be the only wide receiver worth writing about amongst the current roster and, although it’s highly likely the Packers will look to strengthen this area in the upcoming draft, his displays in the playoffs really beg the question why you need more when he’s so damn good.

He recorded 160 yards versus the Seattle Seahawks and followed that up with 138 as the Packers fell to defeat against the San Francisco 49ers; those statistics mean Adams has posted more than 100 receiving yards in four playoff games making him the first player in Green Bay history to achieve such a feat.

The legend that is Rodgers 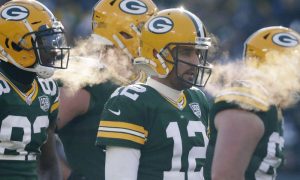 A lot was made of Rodgers not playing at his peak during the post season but don’t forget his performances in the regular season were a massive part of why the Packers even made it so far. The season saw Rodgers throw 26 touchdowns, ranked in the top 10 of the NFL, and he made an eighth Pro-Bowl appearance.

Perhaps the most noteworthy achievement was the fact he recorded over 4,000 passing yards for an eighth time and, barring injury, 2020 will almost definitely see Rodgers join the 50,000 club. Rodgers still boosts enough stamina to rival a stallion in the Kentucky Derby odds.

Underpinning all of what was good about 2019 was LaFleur. When LaFleur was named as Mike McCarthy’s replacement back in January 19 his main task was to get Rodgers firing again after the quarterback and now ex-coach saw their relationship deteriorate. As you may have gathered from the section above, it’s fair to say LaFleur ticked that box.

He’s done more than put an arm around Rodgers though and the Packers 13-3 record is the best set of results achieved by a Green Bay coach in their inaugural season. On the wider spectrum, the fact the campaign culminated in a trip to the conference championship means LaFleur has achieved.

Something that hadn’t been done in almost a decade, which was to lead his team that far in his first season. It’s a high bar to set but we know the Packers will look to smash it next season.

There you have it, a look back at 2019 with one eye on the year ahead and with a combination of Rodgers, LaFleur and additional receivers the Packers look a strong option for any NFL future betting.