The draft is only a few weeks away now and the evidence from last season makes it clear that the Green Bay Packers are in desperate need to add a wide receiver or two to their roster. CeeDee Lamb and Jerry Jeudy are the top prospects but are likely to be long gone by the time the Packers get their first pick so who could be in the running?

Here we look at five names that could be in the frame.

Reagor has the NFL in his genes – his father being former Super Bowl winning defensive tackle Montae Reagor – and since school Reagor has shown that he’s inherited some of those qualities as he racked up over 2,000 receiving yards in a two-year spell. In his first year at TCU, Reagor was named Freshman of the Year as he posted 576 yards, 33 receptions and eight touchdowns.

During the 2018 campaign, Reagor topped 1,000 yards – the first Horned Frog to do so for five years – and although 2019 saw a dip to 611 receiving yards the averages he finished with were more than reasonable at seven touchdowns, 49 receptions and near on 750 yards.

That was just the start for Jefferson though and last year saw him treble his touchdown numbers – giving him 18 – whilst his 111 receptions and 1,540 yards ensured he ranked amongst the top three receivers in the country across all of those stats.

This time last year, Aiyuk wouldn’t have even been a thought in this list after a bog-standard season but 2019 saw the Arizona Sun Devil excel. He fell just short of recording 2,000 yards across the regular season with five of those matches bearing witness to Aiyuk topping out with over 100 yards. Whilst Aiyuk is considered to be on the smaller side and lacking natural physicality he more than makes up with it in speed and agility. 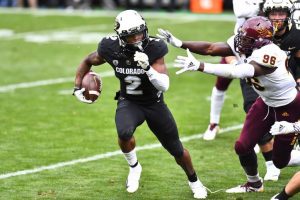 When Shenault first jetted into Colorado he struggled to establish himself and failed to land a single touchdown with just seven receptions and 168 yards to show for his efforts. Fast forward two years though and Shenault’s technical ability has developed a lot with his strong handling skills leading him to 1,775 yards and 142 receptions.

The one thing that could hold Shenault back in the draft though is the recent news that he’s due to undergo surgery for an abdominal injury but a long term view could land the Packers with a real quality asset.

Higgins is the player we expect to go earliest in the draft from the five listed and, with a bit of luck, he’ll be heading to Green Bay. He’s spent three years with the Clemson Tigers – the last two as a consistent starter – where he’s now regarded as one of their greatest ever receivers, which is no mean feat.

Across that 36-month period Higgins just fell short of reaching 2,500 yards whilst 135 receptions and 27 touchdowns round off an impressive set of receiving stats. Higgins stands at 6’4 and has the ability and desire to take catches others might miss with the only area for concern is perhaps a lack of consistency in his game; mind you, he has only just turned 21.

There you have it, five names that have bright NFL futures ahead and any one of them could be joining the Packers’ receiving ranks alongside Davante Adams; if things go to plan then in the upcoming campaign Aaron Rodgers might have more than the solitary man to hit!