The Green Bay Packers are going through offseason organized team activities and normally this would be a low-key time of year. Workouts are optional but most teams have close to 100% participation. Not this year. This is the first time in recent memory that anybody of name has skipped OTAs. We knew Sharon Rodgers wasn’t going to be here but why aren’t the Packers’ receivers in town?

Do they think they are sending some kind of message to the Packers’ front office to do the right thing and fire everyone so Rodgers comes back? If so, they can sit out until the cows come home, because that ain’t happening. Cracks me up that Equanimeous St. Brown isn’t working out. The other guys are all going to make the team anyway, St. Brown got replaced on draft day when the Packers took Amari Rodgers in the third round. 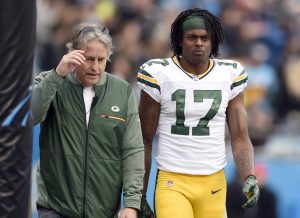 They obviously believe Rodgers is coming back or they wouldn’t be doing this. They would be in town working with Jordan Love to build the necessary chemistry needed for the Packers’ offense to continue to produce at a high level. With Rodgers back the Packers are still one of the Super Bowl favorites, even though under him they lost the last two NFC Championship games. That likely won’t deter bettors from taking the Packers to win it all. Check out this list of new betting offers to get you going.

Speaking of Love, by most accounts he is make quite an impression in Rodgers’ place. It seems the young man took his redshirt year seriously. With every good practice he has it has to excite the coaches. They get to actually coach a young guy and watch him improve as opposed to trying to appease a 16-year veteran diva. I can’t wait until we get our first look at Love, he is the future whether Sharon comes back or not.