Super Bowl LI will be remembered by the winner. If the New England Patriots win, they’ll probably be remembered as the best football team in the history of the NFL. An Atlanta Falcons Super Bowl win would be the first in franchise history, depriving New England of an undisputed status as best-ever.

One of the toughest clichés in pro sports revolves around worthiness basely solely on winning a ring. Fair or not, nobody cares who finished second place, and history barely remembers how well teams perform during the regular season. To paraphrase Henry Russell, winning isn’t everything, it’s the only thing.

This holds true for wagering on your favorite squad. Brian Yankelevitz and Russ Axelrod found out the hard way when they lost their internet-famous bet on the Packers. Most people look to make smarter bets on Super Bowl favorites, whether they like the team or not. When you look at the best single-season teams that never won the Super Bowl, you’ll discover that some simply had a bad game, while others showed hints of a potential breakdown.

5. Green Bay Packers (15-1) – 2011
Few teams blazed through the first thirteen games of the regular season like the 2011 Green Bay Packers, who ran the table until week 14 of the NFL regular season. Somehow, the Kansas City Chiefs – who ended up with a 7-9 record – halted the perfection of Aaron Rodgers and the Packers in one of the most surprising upsets of the year. After this game, the Packers weren’t the same, and likely didn’t benefit from resting all their stars when they secured a bye to the divisional round. They finished the regular season with an average point differential of 12.6 per game, scoring an incredible 560 points during the regular season.

Towards the end of the year, the fissures had started to appear, consisting mainly of weaknesses in their defense. When they met the New York Giants in the divisional playoff round, the offense ended up being out of sync as well. Amid a storm of turnovers and dropped passes, the Packers were walloped by the Giants by a score of 37-20. After setting a single season passer rating record of 122.5, Aaron Rodgers ended up with a 78.5 passer rating for the loss. Comparatively, Eli Manning earned a passer rating of 114.5, throwing three touchdowns and 330 yards en route to an eventual Super Bowl win.

4. Washington Redskins (14-2) – 1983
One of the most dominant regular seasons in the NFL took place in 1983, when Washington rewrote the record books on their way to a 14-2 mark. John Riggins, Art Monk and Joe Theismann tore the league apart, setting new regular season highs with 541 points, a turnover margin of +43 and 61 takeaways. John Riggins set a new TD rushing record with 24 scores, piling up 1,483 yards in total rushing yards. Despite these numbers, Joe Theismann was given the MVP nod, throwing 29 touchdowns and 3,714 yards on a 60.1% completion rate, finishing with a 97.0 passer rating.

After destroying the Los Angeles Rams in the divisional round and withstanding a late charge by the San Francisco 49ers to win the conference championship, there was no indication that Washington would fold as badly as they did against the Raiders. Marcus Allen’s historic 191-yard rushing game didn’t help, especially the 74-yard gallop to the end zone which ended even the most remote chance of a comeback.

Joe Theismann would go on to suffer one of the most horrific injuries witnessed in the NFL, making this anti-climactic Super Bowl the last shot he had at glory.

3. Minnesota Vikings (15-1) – 1998
Regardless of what you think about their playoff performance, the Minnesota Vikings were one the most dominant offense of the 1990s, scoring a record of 556 points during the 1998 season. Nobody predicted this outcome, especially when starter Brad Johnson was injured after a few weeks. Good thing the Vikings had replacement Randall Cunningham ready to go, because he ended up throwing 3,704 yards and 34 passing TDs. This was the year Randy Moss started his ridiculous career, scoring 17 TDs on 69 catches for 1,313 yards.

The playoffs started well enough for Vikings, clobbering the Arizona Cardinals by a score of 41-21 at the Metrodome. Unfortunately for the Vikings, the NFC championship game ended up being one of the most exciting in the history of playoff football. Kicker Gary Anderson missed his first field goal of the year – a 38-yarder – allowing the Atlanta Falcons to force the game into overtime. In a cruel twist of fate, Atlanta kicker Morten Andersen nailed a 38-yard field goal to earn a trip to the Super Bowl in front of more than 64,000 Vikings fans.

2. Carolina Panthers (15-1) – 2015
The 2015 Carolina Panthers had an aura of invincibility that permeated the air around them, aided by their social media presence off the field. On the field, the Panthers stomped all over their opponents. The only team to beat them were the Atlanta Falcons, who made the Super Bowl the next season. NFL MVP Cam Newton dabbed on the NFL, dominating football headlines with his swagger. This somewhat obscured the Panthers defense, which featured two of the top five defensive players in the league.

By the time Super Bowl 50 rolled around, Cam Newton and dabbing were popular household concepts. The Panthers were riding high as five-point favorites after beating the Seahawks in the divisional round and decimating the Arizona Cardinals 49-15 to win the NFC championship. Compared to Newton’s power and versatility, Peyton Manning looked like he could get sacked by a stiff breeze at any moment.

Of course, Carolina would get upset by the Broncos incredible defense. Super Bowl MVP Von Miller lead the charge, stripping Cam Newton twice and registering six sacks, five of them solo. The Dallas Cowboys would proceed to ignore this lesson during next year’s playoffs, plastering social media with pictures of a boat party before losing to an Aaron Rodgers schoolyard play. 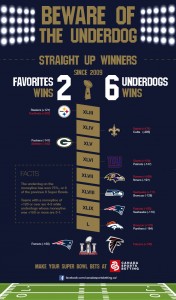 1. New England Patriots (16-0) – 2007
There isn’t a regular season team that performed better than the 2007 New England Patriots. Under Belichick and Brady, this team became the first undefeated squad since the NFL schedule expanded, setting a new record of 16 wins. The offense and defense were elite, resulting in 589 points scored and 274 points allowed. Brady set a record with 50 TD passes, with Randy Moss setting a receiving record with 23 TD receptions. This squad won by an average of 19.7 points, which no team has managed or surpassed.

The divisional and conference playoff games went smoothly as expected, with the Patriots never really having to break a sweat. In fact, the New England Patriots were considered so strong that the Boston Globe released a Patriots championship book for presale, six days before the Super Bowl. This ended up being a classic mistake, as the New York Giants won a slugfest of a championship, ruining the legacy of the best team to never win a Super Bowl.

The divisional and conference playoff games went smoothly as expected, with the Patriots never really having to break a sweat. In fact, the New England Patriots were considered so strong that the Boston Globe released a Patriots championship book for presale, six days before the Super Bowl. This ended up being a classic mistake, as the New York Giants won a slugfest of a championship, ruining the legacy of the best team to never win a Super Bowl.